It’s summertime and I think I am back to writing blogs after a long drought. In my blogpost about Grundy I mentioned work on four projects, the first two being StackOverflow Contribution and Grundy. My third project was a fitness project, a personal challenge which I started in the end of September, 2016.

On 7th of January, 2017, I successfully cycled 1000 tracked kilometres in 90 days, completing 4 months of an epic project.

Cycling has always been a fun way to get around. It’s not very exhausting, quick and an excellent way of getting to know what’s going on in a campus. It’s also a good time to introspect and think about challenging techinical problems (only in traffic-free regions!). Last summer I’d purchased a BTWIN MyBike. Midnight campus cycling turned out to be my favourite way of getting around the scorching summer heat. I started tracking my rides using a GPS app Runkeeper.

On an erratic schedule, I was soon trying to beat my own best average speeds, duration and distance. All this came to a sudden stop due to a small accident and the annual monsoon season. 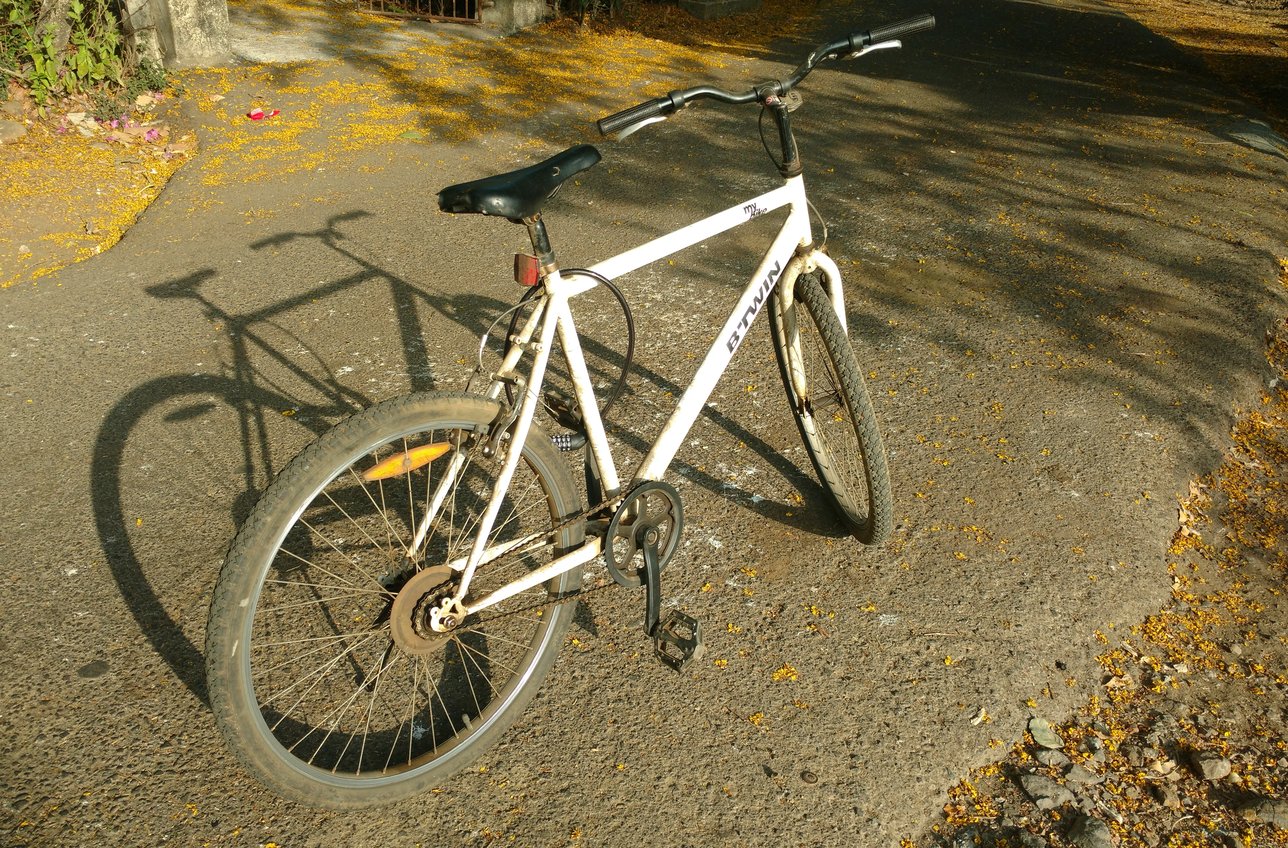 Midway through my fifth semester when the clouds were finally clearing up, I restarted my cycling trips - mostly leisure evening rides on the banks of the serene Powai Lake with the backdrop of the setting sun. I finally made up my mind to make this a fitness routine, something I’d never done before.

So it started - a long journey of riding 1000 tracked kilometres in a span of 100 days. This would not include any untracked cycle rides, such as the daily commute to the academic area. I didn’t want to be too rigid in my first fitness routine, so 10 KM / day sounded fairly reasonable. Due to an erratic academic schedule, I decided not to be stringent about completing exactly 10 KM everyday, but rather focus on completing the lump sum over 100 days. I decided to ignore all days where I would be off-campus for more than 24 hours at a stretch or extremely sick.

The ever-demanding IIT schedule has a lot of exams, and I knew it would be difficult to exercise a day before exams. So I decided to stay ahead of the schedule. By completing 13-14 KM / day, I would gain a free day every 3 days. I stuck to cycling in the IIT campus, simply because a no-traffic region is safer and a lot quicker. 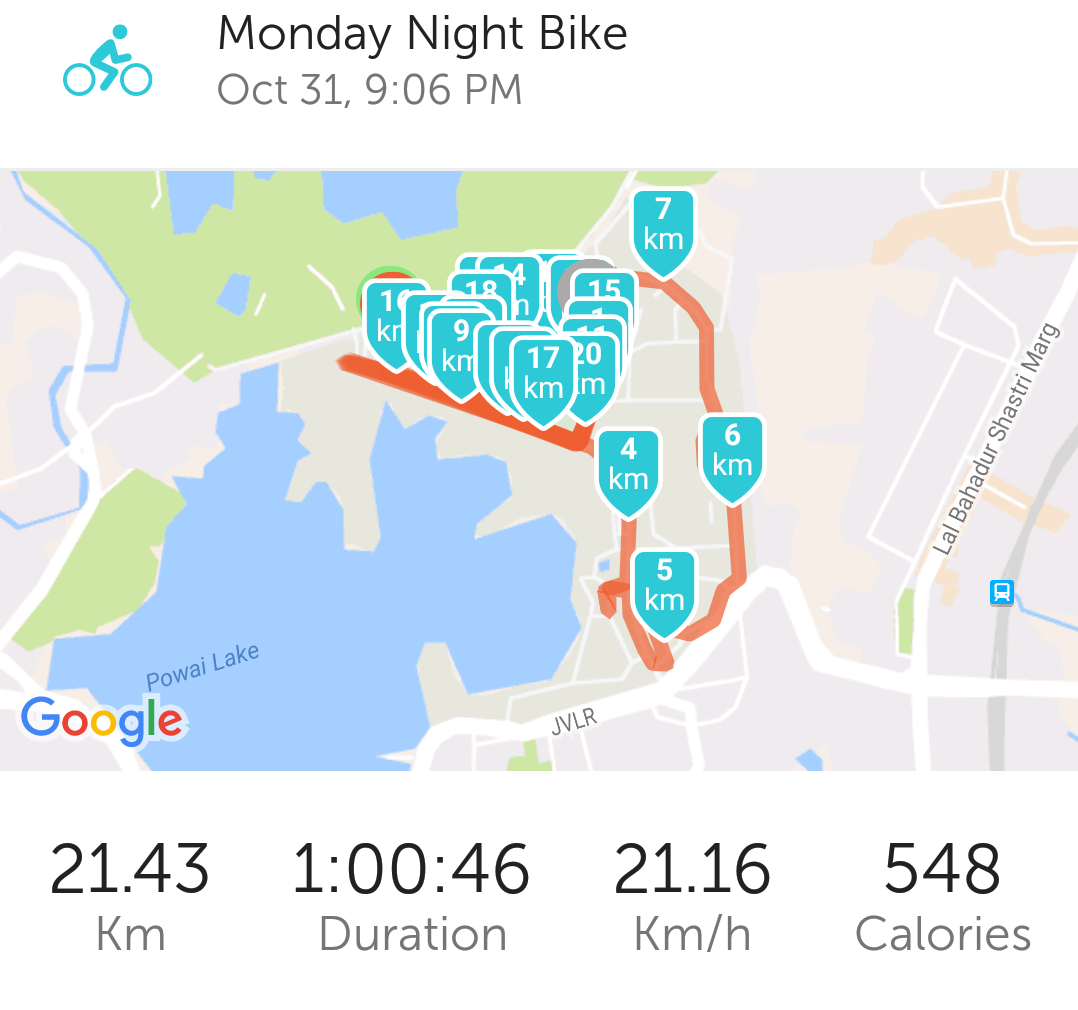 With a good plan and achievable target, I did not expect the routine to be super hard. However, some un-expected hurdles popped up throughout the journey.

While staying on track was hard at first, I soon became accustomed to a daily cycle ride. It was a time of the day I would look forward to, a break from the stressful academic life. By day#30 I was so used to it that I even cycled the day before each of my end-semesters, light 5-7KM leisure rides, and it helped my exam preparation!

I was three days ahead of my schedule until my winter vacations started. Relieved from my academic load, I covered a lot of KM in the holidays. By the day before my finale, I had 24KM left to cover in 11 days.

On the final day, I broke my distance record for the routines, covering all 24KM in a single session. As a celebration I bought a Cadbury Silk Oreo, and ate the whole bar at once. It was a job well done, and an awesome culmination to a 90 day journey.

Well, I’ve never really gotten back to a fitness routine after this. I’ve tried walking / running and restarting cycling, but it’s been as erratic as ever. Unfortunately, my sixth semester was too hectic.

I’m hoping to relive these golden days sometime soon in the future (perhaps this summer). While starting something like this takes a lot of mental determination, I atleast now know that I’ve done it once before, and it won’t be too hard to do again!