Through this blogpost I attempt to summarise the key ideas highlighted in an ICLR-2017 accepted paper, Frustratingly Short Attention Spans in Neural Language Modelling, (read it here), by Daniluk et al, of the University College London. You can read the official ICLR reviews on OpenReview.

In my opinion, this is a very well written paper with strongly motivated ideas and strong results. The original manuscript explains the ideas well, and I hope that this blogpost does justice to the paper!

This paper is primarily motivated by the shortcomings of the traditional attention mechanism proposed in the Bahdanau et al. ICLR-2015 paper. It tries to improve the traditional attention mechanism with a couple of more meaningful models in the context of language modelling. While implementing their new architecture, the authors notice a strange trend in the lengths of the attention spans (and hence the title) which motivates them to build a simple novel architecture, the “N-Gram Recurrent Neural Network”, which achieves comparable performance to the more complicated attention models.

Hence, this paper ends by questioning the usefulness of complicated attention models, and tries to highlight that today’s state-of-the-art architectures suffer from a long term dependency issue, especially in language modelling.

The main issue with traditional attention is evident from the equations, they try to squeeze three pieces of information in a single vector. (If you haven’t heard about attention models, you can head over to colah’s blog). As depicted in the figure below, the paper assumes a fixed length attention span. 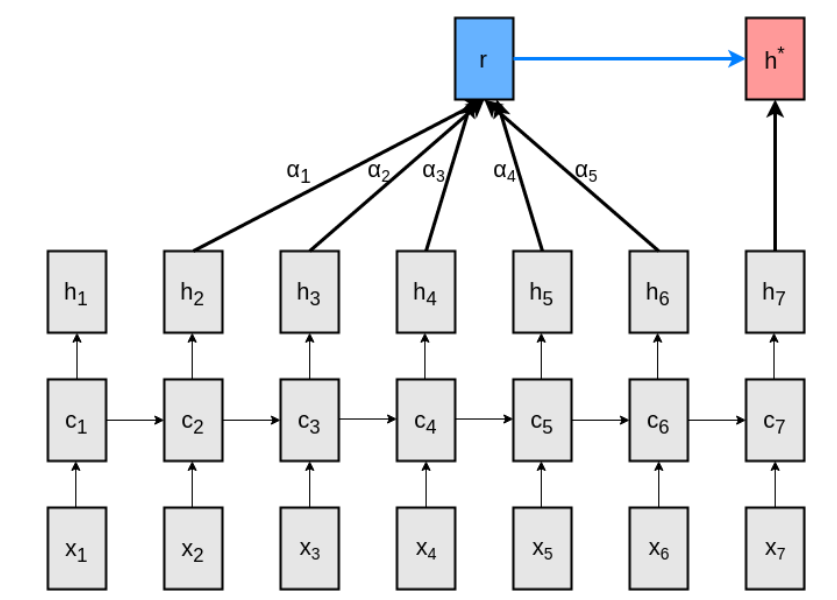 Pay close attention to $\color{blue}{h_i}$ in the following equations,

Quite clearly, the output vectors $\color{blue}{h_i}$ are being used in a three-fold role -

This motivates the key-value and the key-value-prediction model, which attempts to use different vectors (all output vectors of the LSTM) for each of the three roles.

As depicted in Figure 1(b) and 1(c) of the paper, the LSTM produces multiple output vectors (or equivalently, divides $h_t$ into two or more parts). More concretely,

Figure 3(a) and Figure 3(b) of the paper show an interesting trend, and it seems like most of the attention is focussed on the previous 2-5 outputs only. The results of Figure 2(a) show similar perplexities across different attention sizes.

This finding motivates the $N$-Gram RNN, a simple structure which always attends over the previous $N-1$ outputs. This is similar to $N$-gram language models, (Chen and Goodman), which use the previous $N-1$ tokens (a context) to predict the next token. More specifically, 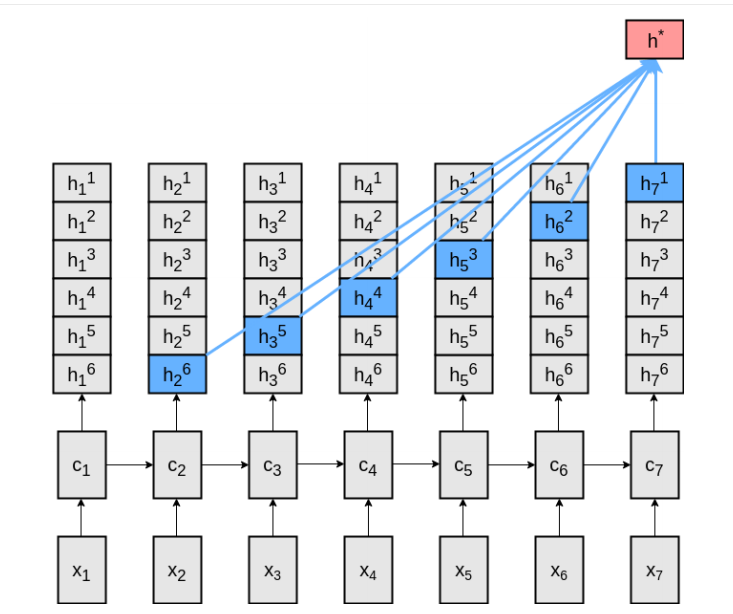 The LSTM outputs $N-1$ vectors (or equivalently divides $\color{blue}{h_{t}}$ into $N-1$ parts, each of which encode information to help predict the $i^{th}$ (from $1$ to $N-1$) token of the future. It’s a very simple neural network, and the four equations in each of the above models are replaced by,

Quite strangely, 4-gram networks perform nearly as well as key-value-predict models (see Figure 2(c)). Of course, this might be very specific to language modelling, but perhaps attention needs a re-thinking?

This paper received a 7/10 in ICLR-2017 and was accepted for a poster presentation. Here were the major highlights of the reviews -

I contacted the authors to clarify a few questions raised during the reading group meeting at SLATTIC. Here’s a brief summary of their reply,

I personally agree with the comments on OpenReview and the conclusions drawn by the author, and they have done a great job with the explanations in the paper. I’m a bit skeptical about Figure 2(a), since I did not expect such a small variation across attention sizes. A window size of 1 is doing nearly as well as sizes of 5, 10 and 15, which puts a little doubt in my mind about the system. Nevertheless, I think this is great research work since,